“Languages open a lot of doors.”

As German parents living abroad we have enjoyed the benefit of our children automatically growing up speaking two languages. When people ask us why we spent so long living abroad, we say that in addition to the experiences that we had, it was a great way for our children to pick up English and then effortlessly maintain it by attending an English-speaking preschool and later an English-speaking school.

Then came the moment to return to Germany. Suddenly you realise how difficult it might be to maintain the children’s two languages that they originally learnt so effortlessly. Of course we could have sent them to a private school, but we experienced the advantages and disadvantages of this when we lived abroad. We simply wanted our children to have a normal German childhood in a normal German primary school. But we still wanted them to be taught in English too! So maybe we didn’t want it to be that normal after all.

Our search began and our frustration grew. The states that were the best options in terms of work were quickly crossed off our list after extensive phone calls with the education authorities. Just an hour of English from their third year of school was not really what we were expecting. On a whim, we typed “Lübeck” and “bilingual primary school” into Google and we struck gold. And we didn’t find just one primary school that fit our criteria, but three!

But it became clear to us fairly quickly that we were only really interested in one school. As only this school had been giving bilingual lessons for such a long time that even our nine-year-old could be taught in German and English. After talking over the phone, sending a lot emails and meeting the headteacher, we were certain that this school was the one that our children would be attending when we moved back to Germany.

Now we have the first year of German school behind us. For our nine-year-old it wasn’t always easy – having to get used to being taught in German as well as learning about things like German capitalisation rules is not exactly a walk in the park – so it was better for her that she could continue using English thanks to the bilingual lessons and have some sort of continuity in her life. And while we almost only talk in German at home, our eldest can easily switch to speaking English fluently. Our seven-year-old reacted to our move to Germany by not speaking English at all when we were at home. So we are happy that she at least continues to hear English at school. She actually understands the language well enough to do word searches in English. We are happy with the way things are going with her as she has had to deal with a lot of changes at a relatively young age. 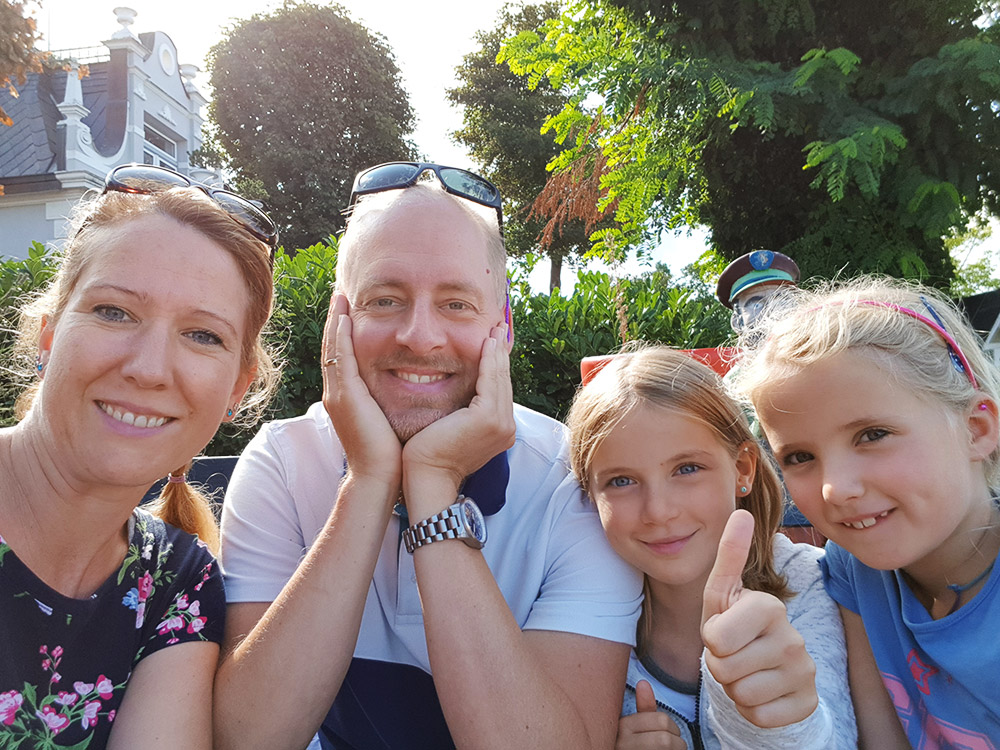 Anja Bartz (left) with her family

For us, choosing to move to Lübeck and send our children to a bilingual school was the right decision. Many people questioned our choice and wondered why we were making life complicated for ourselves and moving up to the North of Germany. Taking the children away from their home and moving back to Germany was only possible for us because we found the perfect school where our children could continue to use their English language skills.

The children are very proud to be pupils at the Roter Hahn primary school. They find it exciting to meet English native speakers at school and it keeps them open-minded and curious. In the broadest sense of the word, they “experience” the English language as it is a normal part of their curriculum and it helps them to be much more open when meeting new people. It is simply completely normal for them to use both languages.

› To the report overview

We need your help!

The project “Bilingual Education Lübeck” is solely financed through donations. If you could support us in any way, we would be incredibly grateful. We will of course provide you with a donation receipt. Thank you very much for your support!

You can find more information in our Sponsors’ Association flyer (PDF).

Donations by bank transfer
Please transfer your donation to the following bank account: